Also named in the lawsuit is USA Gymnastics, along with its coaches and trainers.

"Our client represents the very best America has to offer,” John Manly, the victim’s attorney and partner of Manly Stewart & Finaldi law firm, told the Northern California Record. “She sacrificed her youth and adolescence, spending thousands of hours in rigorous and often painful training to bring glory to our nation as an Olympic athlete. She had an absolute right to trust USA Gymnastics, its coaches and staff.” 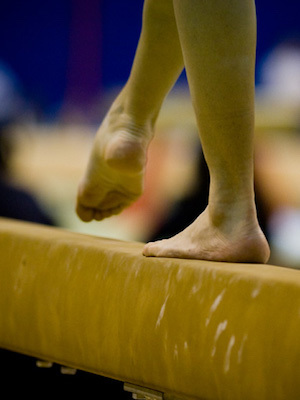 This is not the first time USA Gymnastics have been under scrutiny for turning the other way on past allegations.

“Unfortunately, they have proven time and again that they are more interested in protecting the reputation of their multi-million-dollar enterprise than the child athletes who are entrusted to their care,” Manly said. “Sadly, I believe that our client is not the only victim and others will soon come forward."

In a recent Indianapolis Star investigation, they uncovered multiple examples of child molestation cases that were not reported or were dismissed.

“In a 2013 lawsuit filed by one of that coach’s victims, two former USA Gymnastics officials admitted under oath that the organization routinely dismissed sexual abuse allegations as hearsay unless they came directly from a victim or victim’s parent,” the investigation said.

The current lawsuit alleges that the USA Gymnastics team doctor groped and fondled the victim's private parts under the guise of performing osteopathic therapy.

“According to the victim, the doctor performed a procedure he called an ‘inter-vaginal adjustment’ for which there is no recognized medical purpose,” according to a Sept.12 PR News Wire article.

The lawsuit further alleges that USA Gymnastics breached its duty to reveal the abuse to the victim's family, the U.S. Olympic Committee and law enforcement agencies.

“In addition to compensation for the victim, her attorneys will ask for a court-appointed monitor to protect the interests of children who participate in USA Gymnastics programs,” the PR News Wire article said.

Manly Stewart & Finaldi is a California law firm representing children of sexual abuse. The firm has represented more than 150 victims of clergy sexual abuse in California and hundreds of others throughout the United States. As attorneys with the firm learn more about the victim’s case, they say they are surprised to see the level of negligence from USA Gymnastics.

“America just celebrated the magnificent achievements of another splendid group of women gymnasts at the 2016 Olympic Games,” the victim's attorney, Vince Finaldi told the Northern California Record. “It is shocking to learn that the USA Gymnastics program has a long dark history of sexual abuse that must be brought to light and ended forever."

Want to get notified whenever we write about USA Gymnastics ?

Sign-up Next time we write about USA Gymnastics, we'll email you a link to the story. You may edit your settings or unsubscribe at any time.