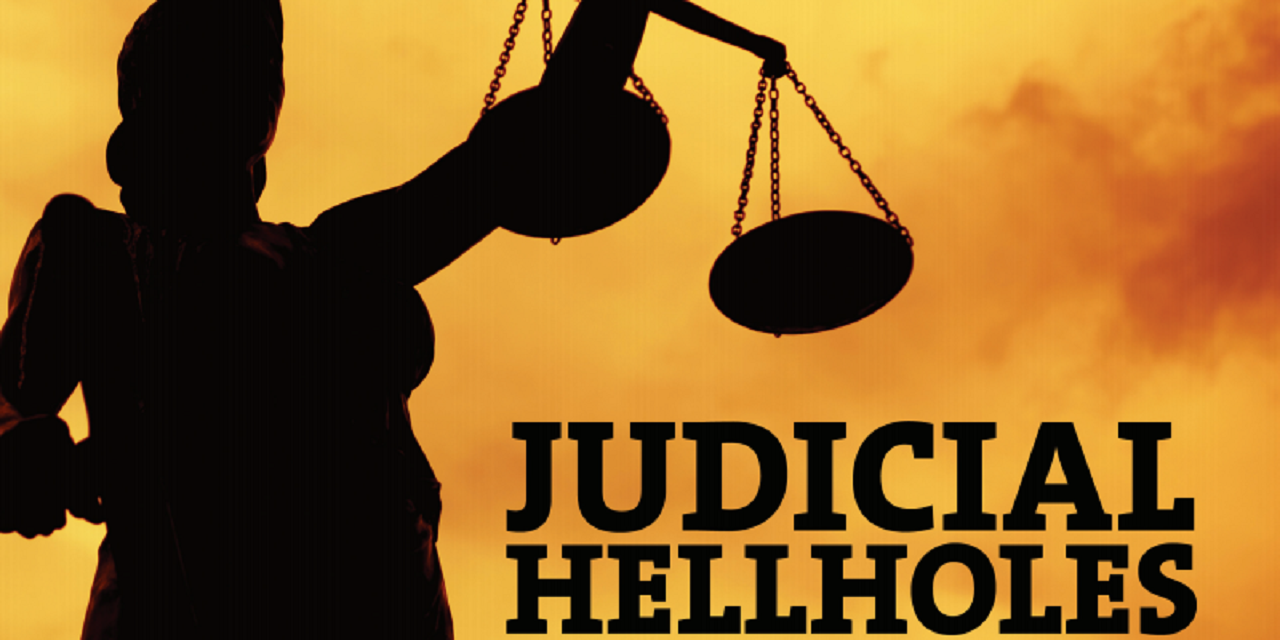 WASHINGTON – The American Tort Reform Association (ATRF) released its annual Judicial Hellholes report this week with the state of California once again placing among the worst legal climates in the nation at number two, following only the Philadelphia Court of Common Pleas.

Since 2002, the ATRF Judicial Hellholes program has “identified and documented places where judges in civil cases systematically apply laws and court procedures in an unfair and unbalanced manner, generally to the disadvantage of defendants,” according to the report.

“More recently, as the lawsuit industry has aggressively lobbied for legislative and regulatory expansions of liability, as well, the Judicial Hellholes report has evolved to include such law-and rule-making activity, much of which can affect the fairness of any given jurisdiction’s civil justice climate as readily as judicial actions,” the report states.

California, which placed atop the list a year ago, has for years struggled with laws such as Proposition 65, which requires some products to have a consumer warning label that includes more than 1,000 listed chemicals deemed carcinogenic, and most recently the California Consumer Privacy Act (CCPA), a complex yet incoherent internet privacy act which is set to take effect on Jan.1.

The report itself also touches on the state’s Private Attorney General Act (PAGA), or what it refers to as the “Sue Your Boss Law,” a bill that authorizes employees that are allegedly subject to illegal labor code violations to act as private attorneys general to recover civil penalties from their employers for violations of the labor code. PAGA has led to copious amounts of litigation throughout the Golden State.

“The current construction of PAGA by California courts [which have their own constitutional infirmities] gives rise to the following unconstitutional framework: valid and binding arbitration agreements are rendered unenforceable; private contingency-fee attorneys are permitted to litigate on behalf of the state without oversight or coordination with any state official; private attorneys are allowed to negotiate settlements that enrich themselves at the expense of everyone but themselves,” the report quotes from the California Business & Industry Alliance's suit against the state of California over allegations of a lack of governmental oversight of PAGA litigation.

Another major legal issue within the state that the report touches on is the wave of Song Beverly Act cases, better known as California Lemon Law, in which plaintiffs are suing vehicle manufacturers by the dozens. In some cases, their lawyers are garnering massive attorney fees regardless of what they are winning their clients.

“The intent of the law was to ensure manufacturers would repair, replace, or repurchase a consumer’s defective vehicle as quickly as possible,” reads the report. “However, plaintiffs’ lawyers have learned to exploit loopholes in the law and create windfalls for themselves at the expense of a fair resolution for consumers.”

Additionally, the report details, among other issues, the ongoing battle between Bayer/Monsanto’s Roundup and the thousands of plaintiffs who claim its active ingredient glyphosate caused their cancer and the state’s attack on the Federal Arbitration Act (FAA), in which it claims the state is “ignoring clear guidance from the U.S. Supreme Court and federal law.”

Want to get notified whenever we write about American Tort Reform Association ?

Sign-up Next time we write about American Tort Reform Association, we'll email you a link to the story. You may edit your settings or unsubscribe at any time.